A Little Piece of Heaven With Sprinkles on Top

Many times in life I've considered what I would want to do if I didn't get a "real" job. For instance, moving to Nantucket and opening a bead shop. One time my friend Meredith and I, at age 17, toyed with the idea of opening a cafe serving only sandwich-wraps. But the constant dream has been to be... a baker. Well, since that hasn't happened (yet), I am left to rely on other people to do my gourmet baking for me. Luckily, one of the best sweet shops in all of the world-- Sweet Mandy B's-- is just a short walk from where I live. 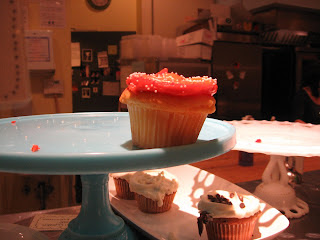 I went to Sweet Mandy B's last night for the first time in a while. When it was warmer, I used to stop by more frequently to pick up a cupcake, a cookie, or one of the other many delicious sweet treats this place has to offer. However, now that the weather has turned... hmm... unbearable, I've had a hard time making it the two blocks down the street to stop by.

Although the sweets offerings are numerous, ranging from cookies and whoopie pies to puddings and freshly baked pies, the cupcakes are really what makes this place famous. They offer traditional chocolate and yellow cupcakes (which are the best), but they also mix it up a bit with creamsicle cupcakes, red velvet cupcakes, carrot cake cupcakes, banana cupcakes, and whatever else might be the special of the day. The cake itself is moist, supple, and light, and the buttercream frosting is really what makes the cup. Seriously, once you taste this frosting, you'll NEVER want to eat another grocery-store cupcake again. My friend John actually works at Sweet Mandy B's, and I've tried to eek the recipe out of him before, but it is a highly guarded secret.

Forgot to take a pic of my yellow cupcake, which had Chicago Bears' orange frosting (GO BEARS!), but here's a pic of a lone creamsicle cupcake. Whimsical.
Posted by third coast toast at 4:21 PM

Email ThisBlogThis!Share to TwitterShare to FacebookShare to Pinterest
Categories: Adventures in Dining

I LOVE Sweet Mandy B's! I don't think it's possible for me to drive down Webster and not stop at the adorable little shop for a cookie or -my favorite!- whoopie pie. And those cupcakes are to die for. I wish I could just buy pints of the buttercream. Seriously, it's amazing.