Ok. So I realized two things recently: 1) I am kind of poor (hey, junior ad execs don't get paid enough), and 2) that most really good food is really expensive. I mean, I love cheap burgers, pizza, burritos and other dives as much as the next guy, but sometimes I really just want a nice meal, in an inspiring atmosphere. Clearly that's not something I can afford on a regular basis, but it's worth it for the splurge every now and again. And while there are places in Chicago that I REALLY can't afford right now (i.e. Aliena, Charlie Trotter's, Tru), there are luckily dozens of what I like to call nice "mid range" eateries in town too. I qualify "mid-range" restaurants as having $20 - $30 entrees, quality food & service that stacks up to the price, and a sophistocated atmosphere.

Seeking to feel inspired (at a mid-range price), Ted and I went to check out Hot Chocolate in Wicker Park last Thursday evening... and inspired we were.

Hot Chocolate is an absolutely delightful restaurant aptly situated among the hip, trendy boutiques and eateries on Damen Ave in Wicker Park. Although breakfast, lunch, and dinner are on the menu, the place is really known for its desserts -- chef / owner Mindy Segal (former pastry chef at MK) was just nominated for the 2007 James Beard Outstanding Pastry Chef Award (see all the nominees here). With warm dark chocolate walls and decor, as well as a dynamically lit bar and an open kitchen at the back, the place really begins to glow as the sun goes down.

We were seated promptly upon arriving around 7:15, and although it wasn't very busy when we arrived, the place soon became packed. The clientele were sophistocated, hip, and energetic, yet unpretentious, contributing to the atmosphere of the place itself. Armed with a gift certificate from restaurant.com (thanks Mom & Dad!) Ted and I decided to go all out. We started with an appetizer of mussels in a green curry, coconut, and lemongrass sauce: 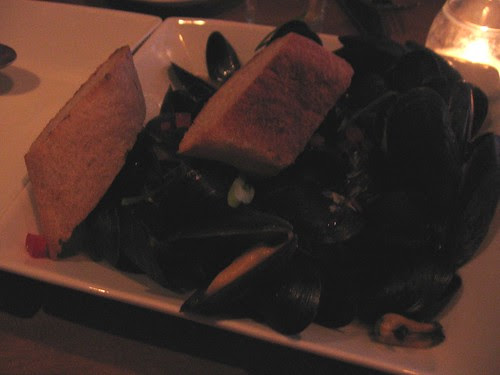 I don't really eat that many mussels, but these defintiely tasted like "the ocean" to me. Don't know if that's a bad or good thing, but I just couldn't really taste the delicious flavors of the sauce in the mussels over the ocean taste.

Next up was our entrees. Ted got the Lamb, which was expertly prepared, but came with grits, which I don't think complemented the lamb very well. I got the Short Rib (pork) with baby carrots, caramelized brussel sprouts, shoestring sweet potatoes (I think), and potato puree. The rib was delightfully tender, moist and full flavored, and the veggies complemented the meat nicely. 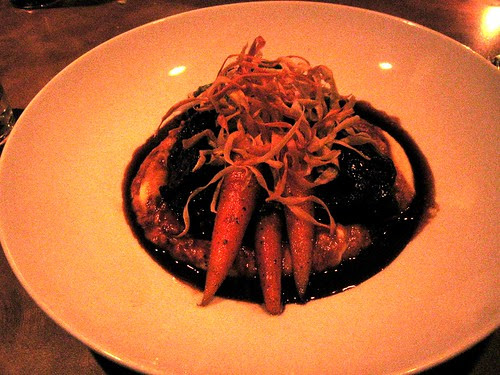 The first courses were quite good, but the desserts totally blew us away. We couldn't decide on just two... so we decided to get three.

Here are the hot fudge-filled hazelnut ravaoli with cherries and whipped cream... a knockout combination of flavors and textures. Sweet pasta? I'm all over it. 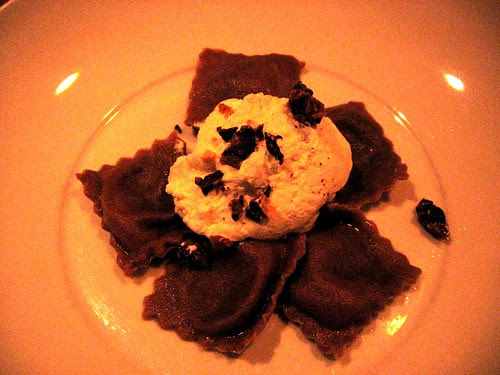 Here is Ted's choice, a citrus medley of lemon merengue, blood orange, and a lime shortbread tart, which had a wonderfully creamy tone complemented by the zing of the citrus: 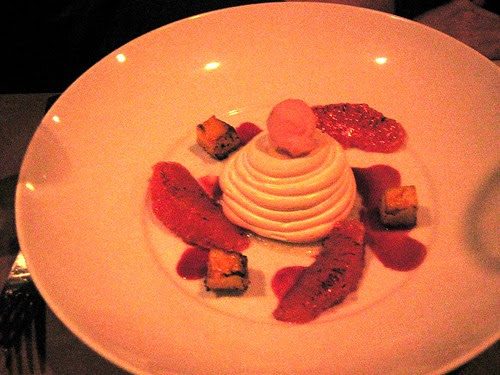 And here is our agreed upon favorite, the apple tart with butterscotch apple ice cream, in a brandy sauce... SO GOOD: Another cool thing about the evening was that Mindy Segal was a visible presence at the restaurant-- we saw her bustling around in her chef's coat and pigtails, making sure things were going smoothly in the kitchen and at the front-of-house. According to "industry sources" she's kind of a firecracker, but she runs a tight ship, and Hot Chocolate (her first solo project) has been a huge success. Since I started this blog I've begun to take notice of chefs a lot more, and knowing that they're in the kitchen the night you're there only adds to the excitement of the dining experience. Most times, the head chef, like the star of a play, will be in the kitchen-- on the stage-- on any given night. But sometimes, the star has finished his or her award-winning run and moved on, like in the case of Charlie Trotter's, where the man himself hasn't been in the kitchen for years. Serious foodies will say that this makes a difference-- that, for instance, Trotter's is past it's prime without the man in the kitchen. But I figure if the quality and reputation are still upheld without the founding star, it's still great. I mean, I would have loved to see Wicked when Idina Menzel and Kristen Chenoweth were still in the starring roles. But the story and music is still just as moving with new stars in their places.

All in all, chef-in-the-kitchen-or-not, I definitely plan to go back to Hot Chocolate. Next time though, I think I'll just splurge on the desserts.
Posted by third coast toast at 9:04 PM

Email ThisBlogThis!Share to TwitterShare to FacebookShare to Pinterest
Categories: Adventures in Dining